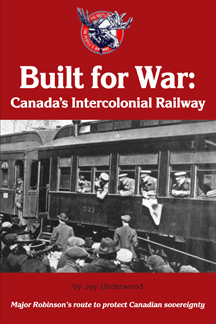 To order right away using your credit card, click below on Buy Now.

Here's how to SAVE:

You'll save time and some money if you "Buy Now" using your credit card (below). Note: US$ to ALL addresses.

You'll save A LOT MORE by using the special "Going Postal" offer.

Postal service supports use of mail order. Save twice as much with special mail-only pricing.

* This is a "Perfect-bound" book with added hard cover, but no separate dust jacket.

Anyone who has had occasion to travel on VIA Rail’s oldest trans-continental train ‘The Ocean’ between Halifax and Montreal might wonder why the original route of the Intercolonial Railway took such a round-about course through northern New Brunswick.

The answer lies in the fear nineteenth century Canadian and British politicians had that the Americans might attempt to seize control of British North America in a winter attack. With the St. Lawrence river frozen solid, reinforcements from Britain could not reach the fortress at Quebec. Hence, the building of the defensive rail line, following “Major Robinson’s Path,” a much overlooked facet of the railway’s history.

Built for War: Canada’s Intercolonial Railway tells the story of Canada's first attempt to assert its sovereignty, and how the railway, built with military and economic objectives in mind, served its purpose so well.

“Built for War is Underwood’s third work of railway history and his largest to date.”

“Conventional history suggests that the railway was something ‘given’ to the Maritime provinces as a condition of Confederation to improve the region’s economy. Instead, Underwood argues that the railway was a military necessity for defending central Canada from any invasion by the United States during the winter months.”

Jay Underwood (1958-2013) lived in Elmsdale, Nova Scotia, and had a life-long connection with the military and the railways. Born in Changi, Singapore, son of a Royal Air Force non-commissioned officer, he earned his diploma in journalism from Holland College of Applied Arts and Technology in Charlottetown, PEI. He was city editor of the Truro, NS, Daily News, and served for several years as the information officer for 1st battalion, the Nova Scotia Highlanders (North), Canada’s largest militia infantry battalion.

He joined the Halifax Daily News as senior copy editor and a member of the editorial board. His books include Ketchum’s Folly, a history of the Chignecto Ship Railway in Cumberland County (Lancelot Press 1995), Full Steam Ahead, (Lancelot Press, 1996), a biography of Nova Scotia born Alexander Mitchell, the designer of the 2-8-0 Consolidation type steam locomotive that went on to become one of the leading designs of the steam era.

Underwood acted as president of the Nova Scotia Railway Heritage Society, and was a contributor to Canadian Rail, the journal of the Canadian Railroad Historical Association. His article “Fruit of a Poisoned Tree,” an examination of the adoption of standard gauge on Canadian railways, won the association’s award for best article in 2002.

Special "Going Postal" Offer for mail- and eMail-orders only:

For a limited time, you can save 10% on the list price and take advantage of flat rate shipping. Here's how it works: one book or many – it doesn't matter which! If the total value of your order is:

Send your order now. You'll get 10% discount off the list price.

US$ funds for USA addresses

1. Just fill out the fields below, and press SUBMIT.

2. You'll get a prompt e-mail acknowledgement of your order, confirming your total cost.

3. There's absolutely no obligation if you change your mind upon receipt of your acknowledgement.

4. You can then CONFIRM your order and enclose your check, bank draft, or money order.

6. You can choose to PAY your Paypal invoice securely on-line, with your credit card.

Just fill out the form below and submit!